In the human body, the blood is pumped out of the heart by the heart, transported throughout the body, and returned to the heart through the veins. Therefore, in an erect human body, venous blood can overcome the effect of gravity and return from the lower limbs to the upper heart, which requires relying on the secret weapon – the venous valve.

Venous valves are one of the hallmarks of a vein from an artery, usually a two-leafed one, like a two-door, slender, soft, open-and-close activity-sensitive.

It is distributed throughout the body, the highest density in the lower extremity veins. But not all veins have valves, such as the portal vein is not.

How do venous valves work?

Take the lower limb as an example. Our calf is like a pressure pump: when the muscles contract, the resulting high pressure forces the venous blood to flow back to the heart; when the muscles relax, the venous valves close and prevent the blood from returning to the legs.

Valvular closure also produces negative pressure, prompting the blood flow from the superficial vein into the deep vein, thereby further increasing the return of blood to the heart. 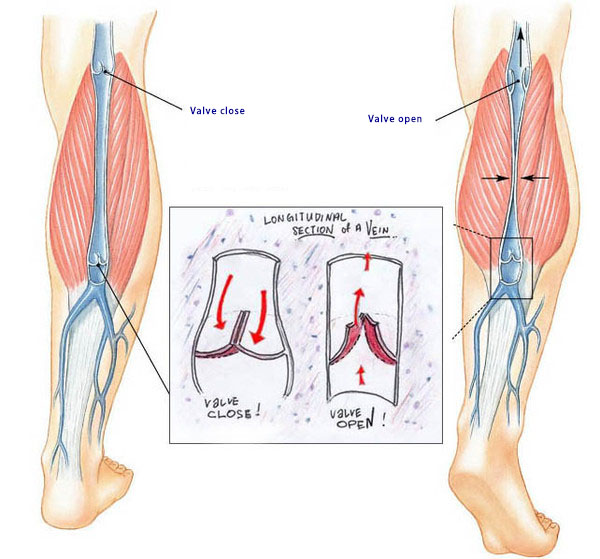 How to evaluate whether the venous valve is working properly?

As an indicator of valvular function, the Valsava action was taken while the patient was standing (a sudden breath-hold after a deep inspiration) and the duration of the blood reflux was measured.

In general, 80% to 90% of normal human venous valve regurgitation durations are less than 0.5 seconds, and 10% to 20% exceed 0.5 seconds (so you are overly concerned about anxiety without seeing abnormal reports). Valvular reflux time greater than 1 second can be combined with clinical valvular insufficiency.

What caused the venous valve dysfunction?